Who Was Christ That Died and Rose Again?

Who Was Christ That Died and Rose Again?

“WHAT think ye of Christ?” was a question Jesus of Nazareth himself posed to the Jews. Controversy over him has echoed down through the centuries in endless wordy conflict, and has led to persecution, torture, and war. His name is The Prince of Peace; yet only too clearly has his own prophecy been fulfilled: “Suppose ye that I am come to give peace on earth? I tell you, Nay; but rather division” (Luke 12:51). “I came not to send peace, but a sword” (Matt. 10:34).

Disheartened by the strife and bloodshed, men may turn from the subject in disgust. Yet to know Christ is the most vital knowledge we can possess, for the apostle John says: “Whosoever believeth that Jesus is the Christ is born of God” (1 John 5:4). Jesus himself declared the other side of the same truth when he said: “Except ye believe that I am he, ye shall die in your sins” (John 8:24). What that means the apostle Paul showed when he told the Corinthians that if Christ had not risen, “Ye are yet in your sins”, and added: “Then they also which are fallen asleep in Christ are perished” (1 Cor. 15:17-18). Without belief in Christ, there is no hope of future life; with belief in Christ (in the Scriptural sense of the term “belief”) men may become “sons of God” and “sons of the resurrection”, dying no more, but living in eternal fellowship with God and His Christ.

The question, then is not to be evaded, and responsibility for answering it cannot be escaped. The lamentable history of nearly two thousand years bears witness to the uniqueness of Christ. No other has made such claims, revealed such character, or left such a powerful impress on all subsequent history. Of no other can it even be suggested that life depends on belief in him.

His coming was hailed with a message of “peace on earth”: why should his name bring strife? The cause of the conflict is not in his own purity, or in the truth concerning him; it is found in the impact he makes on a world which denies or betrays him. Men’s philosophies and feelings are at variance with him; and his words and theirs have been commingled in the teaching of the churches. But they can never truly blend. Yet the disciples who went out with his authority and with his message taught a doctrine which could be known and believed by any man. What is it that the Scriptures have to say concerning Christ?

1. They give us a reason why Jesus Christ was called the Son of God; this is that he was not naturally begotten, but generated in a virgin mother by the power of the Spirit of God.
“The angel said unto her (Mary), The Holy Spirit shall come upon thee, and the power of the Highest shall overshadow thee: THEREFORE also that holy thing that shall be born of thee shall be called the SON OF GOD” (Luke 1:35). “Joseph, thou son of David, fear not to take into thee Mary thy wife, for that which is conceived in her is of THE HOLY SPIRIT” (Matt. 1:20). “Unto us a child is born; unto us a SON is given” (Isa. 9:6).

2. They tell us that though Son of God, he shared our human nature. He was put to the proof, experiencing the life of men yet never faltering in his obedience to God. Through this both he himself was saved — being raised up from death to glorious life — and he is able to save those who come to him.
“Forasmuch then as the children are partakers of flesh and blood, he also himself likewise took part of the same” (Heb. 2:14). “In all things it behoved him to be made like unto his brethren” (Heb. 2:17). “He was in all points tempted like as we are, yet without sin” (Heb. 4:15). “Though he were a son, he learnt obedience through the things which he suffered” (Heb. 5:8). “By the obedience of one shall many be made righteous” (Rom. 5:19). “He obtained eternal redemption … he became the author of eternal salvation to all them that obey him” (Heb. 9:12; 5:9). “God hath raised him from the dead” (Eph. 1:20). He is “declared to be the Son of God . . . BY THE RESURRECTION FROM THE DEAD” (Rom. 1:3). Being raised from the dead, he dieth no more: death hath no more dominion over him” (Rom. 6:9). “He that raised up the Lord Jesus shall raise up us also BY JESUS” (2 Cor. 4:14). “The Lord Jesus Christ: who shall change our vile body that it may be fashioned like unto his glorious body” (Phil. 3:21).

The Scriptural statements show that Jesus Christ was the incarnation — not of an Eternal Son — (a contradictory, as well as an unscriptural, form of speech), but of the Father, who, though dwelling in heaven, and filling immensity with His Spirit, manifested Himself on earth 1,900 years ago, in the wonderful manner exhibited in the birth, life, works, death and resurrection of the Lord Jesus Christ. 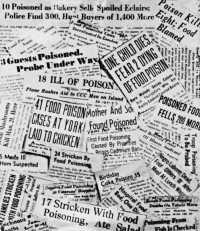